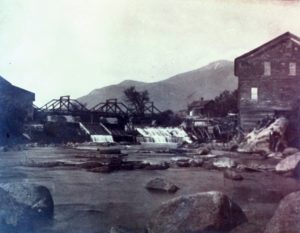 The Town of Wilmington was founded nearly 200 years ago by hardy pioneers from New England, searching for land and a self-sufficient way of life.

Over the years, it has been transformed from an obscure farming village on the banks of the AuSable River to a four-season resort town. Its earliest industries were grist milling and distillation of whiskey from the grain fields.

Surrounded by natural beauty, the West Branch of the AuSable River and Whiteface Mountain, the area gradually gained a reputation as a scenic resort.

As the 19th century drew to a close, emphasis shifted from the traditional farming to the relatively new industry of tourism. Tourists have remained Wilmington’s lifeblood ever since.

Around the turn of the century, Wilmington entered the golden age of hotels which was to last until after World War II. Private entrepreneurs such as Frank Everest and Ed and Oscar Olney operated their hotels and gradually the town’s reputation grew. Wilmington, home of Whiteface Mountain was on the map.

In the early 1930’s construction of the Whiteface Mountain Veteran’s Memorial Highway was begun. Dedicated by then Governor Franklin Delano Roosevelt to the men & women who gave their lives in defense of their country, it has since become one of New York State’s most popular attractions.

After WW II when servicemen returned home, the automobile took on a new importance. The mobile society created by this generation-on-the-move signaled the end of Wilmington’s great hotels.

By the 1940’s, downhill skiing became a significant new winter sport, and the Whiteface Mountain Ski Center was inaugurated, first at Marble Mountain, then in 1958 at the current site. Tourism in Wilmington had been expanded to the winter season. In the 1950’s, due in large part to the introduction of Santa’s Workshop in Wilmington as America’s first theme park and the new ski season at Whiteface Mountain, motels sprang up all over town.

With the 1980 Winter Olympics, Whiteface Mountain in Wilmington became the center of the Alpine events, and the world watched. Since then, World Cup and other ski and snowboard competitions come to Wilmington on a regular basis.

Wilmington continues to add to its tourist economy, always searching for ways to attract new generations of visitors. Most recently mountain biking trails and other biking events bring unique ways for visitors to enjoy our beautiful scenery, closeness to nature and warm hospitality, as well as the Adirondack Wildlife Refuge and Rehabilitation Center.

Wilmington has evolved into an outdoor recreation mecca. This Wilmington Historical Walking Tour will give you an idea how time and conditions have changed the complexion of the town.

You will discover that the things that have remained constant since its founding in 1822 is Wilmington’s surrounding natural beauty and warm friendly people.